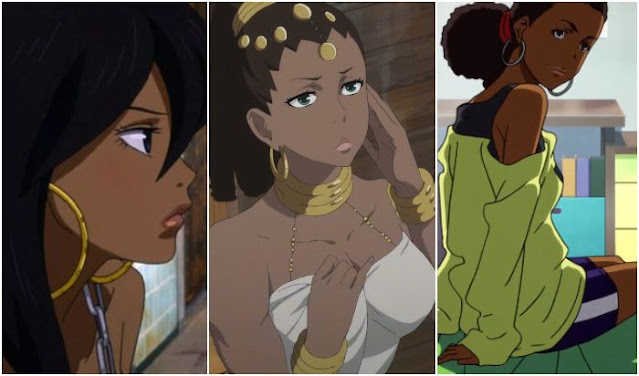 Cute anime girls come in all shapes and sizes, but here's a selection of the most attractive dark skin anime girls to appear in Japanese animation, all of them smoking hot in their own right, while unique in appearance and design.

You probably won't find these melanated beings featured in many top 10 anime lists dedicated to the best waifus, but that doesn't change the fact that these 2D girls are literal eye candy who also deserve their roses.
Michiko Malandro - Michiko to Hatchin 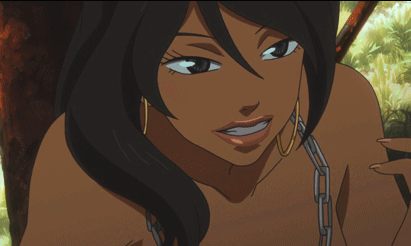 As the main protagonist of Michiko to Hatchin, Michiko Malandro is a wild spirit and free-willed diva who apparently breaks out of a maximum security prison on several occasions. Despite her mature appearance, Michiko has a tendency to be loud and immature, prone to throw a hissy fit when things don't go her way.

Naturally she is always the center of attention and competitive in nature. A woman who isn't afraid to stand in someone's face and give them a piece of her mind. Despite this Michiko has also been shown to have a heart of gold. She can be caring in her own little way;  and kind to those she who she adores,  trusting them with all her heart.

An interesting fact about Michiko is that even though she is Afro Brazilian, her character design is based on and inspired by the late American singer, actress and model Aaliyah. 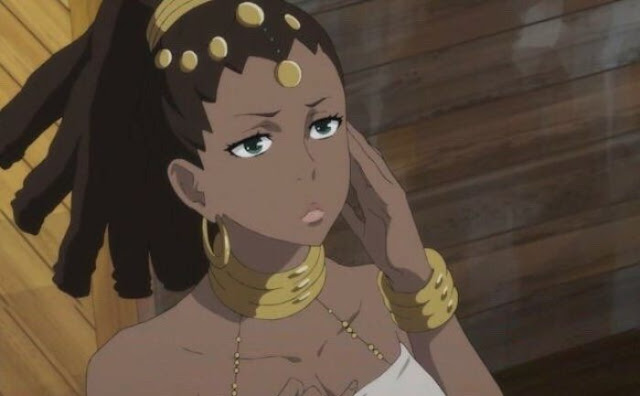 Lashiti is a loyal, obedient and soft spoken retainer of the Tibesti royal family in Dimension W. She's in fact so compliant and leal that she once took an assassin's bullet meant for the prince of her kingdom.
Her lowly status doesn't take anything away from her looks though, because Lashiti is sickeningly beautiful and if that wasn't enough she also has a nice pair of hooties to salvatate over. This beauty also has a short yet insanely hot scene in Dimension W, where she is possessed by The Wind of Africa. 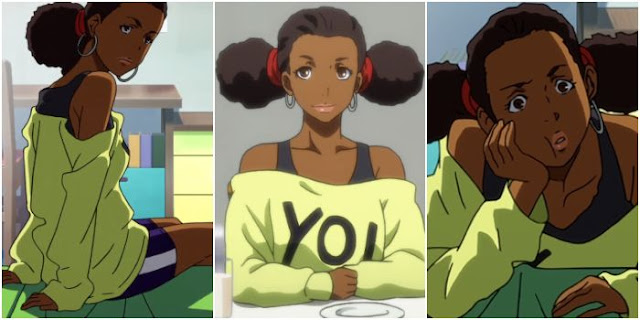 Sadly Anne is only a minor character, having only appeared in one episode of Garo: Vanishing Line, but her character design is beyond saucy. Anne is a roommate to the main protagonist Sophie and really cares about Sophie and her grades. Her final appearance shows her fast asleep at her desk, implying she studies hard. 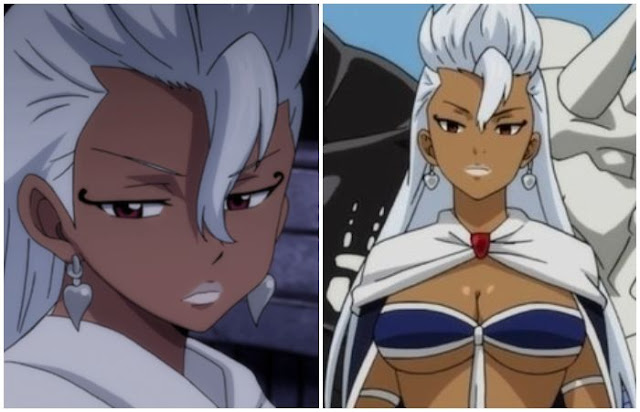 Briar is a bewitching villainess and member of the Black Magic Cult Avatar in Fairy Tail, she also possesses a curvaceous body which is barely covered beneath her skimpy outfit, leaving nothing to the imagination of the viewer.

Female villains who fight for the dark side usually have three things in common: a stylish wardrobe, breath-taking beauty, and an hoard of unforgettable one-liners that help to ensure the limelight remains firmly on them and Briar ticks off all those boxes.

Briar comes across as fairly chilled, although she also has a quirk of giving people nicknames that are indicative of their personality or appearance. The coolest thing about Briar besides her character design is her cloning magic ability, which allows the cultist to make four copies of herself each with a personality that embodies a different emotion.
Natalia Perez - Michiko to Hatchin 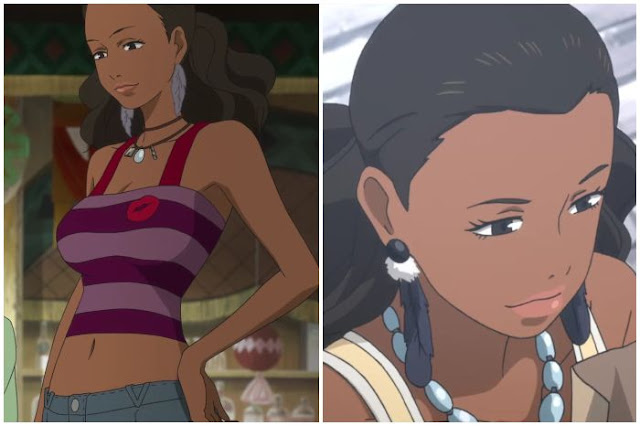 Michiko to Hatchin features so many beautiful girls that it's almost hard to keep track of them all. One  happens to be a minor character known as Natalia Perez. She works at an unnamed restaurant as a waitress and is impregnated by an unworthy man.
Olivia - Pokémon the Series: Sun & Moon 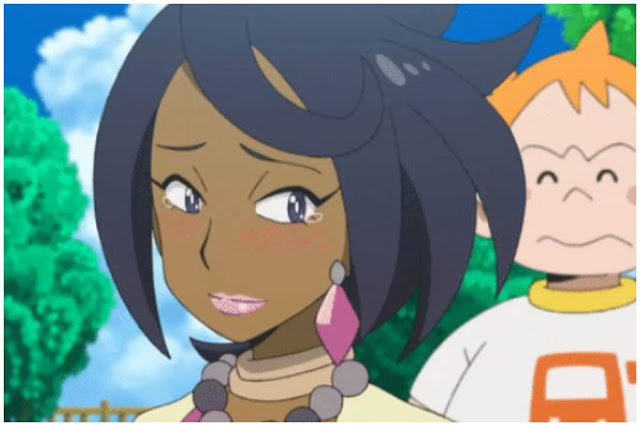 In the Pokemon sun and Moon anime, Olivia is an extremely energetic woman who is sweet in nature. However she is also really clumsy, consistently falling to the ground during simple tasks like walking up the stairs or opening a door. You could say she's borderline comic relief fodder, which really doesn't fit her character design.

Olivia also possesses the unique ability to interact with Pokémon on a different wavelength than most people, giving her a natural affinity even with highly hostile Pokémon such as Kiawe's Turtonator and Ash Ketchum's Litten. 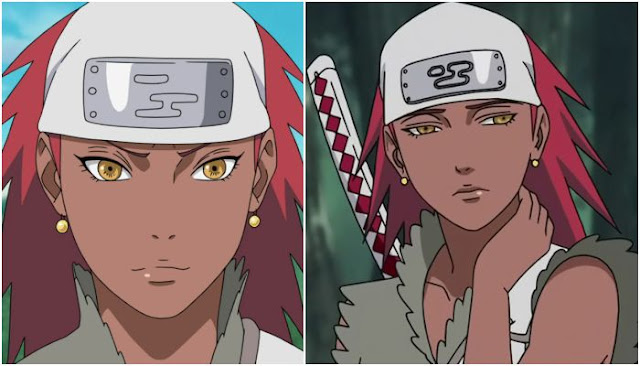 Karui is a kunoichi from Kumogakure, and a member of Team Samui in Naruto Shippuden. She appears to have a slightly comedic pessimistic relationship with her teammate Omoi. During their debut, they quarrelled over the possible reasons that the Raikage could have summoned them. She believed that he wanted the trio to deliver more protein shakes to him.

However, the bickering began with Omoi who implied that she is embarrassingly flat-chested compared to their other teammate, Samui. Like the rest of her team, she greatly respects Killer B and was steadfast in her pursuit of retaliation against Sasuke.

She is also quite competitive, blunt , stubborn and hot-headed, allowing her emotions to get the best of her. She came to a raging point when she took out her anger on Naruto Uzumaki and beat him within an inch of his life (hot), although Omoi later claimed she later regretted her actions.
Yoruichi - Bleach 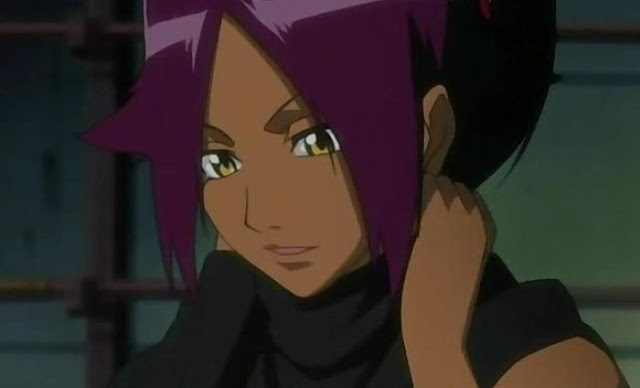 Bleach's Yoruichi is arguably one of the most popular dark skinned anime girl characters of all time. She is intelligent, witty and rather a tease when the opportunity arises. She can also transform into a black cat, and prefers spending most of her time in this form.
Due to being in cat form for so long, she normally forgets to put on her clothes and has grown used to not needing or wanting to wear them. She also takes pleasure in transforming in front of people to see their shocked reaction.
. .
Although fairly calm and mature in a serious situation, Yoruichi can also be carefree  and playful, often goofing around or flirting with people younger in age than her. She also enjoys drinking milk, which comes as no surprise considering her cat transformation. 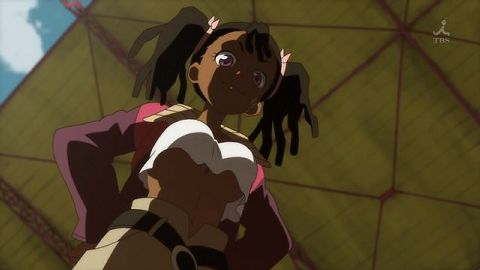 Miyuki is a master mechanic and the childhood sweetheart of the main protagonist Dan in Basquash. Although she is not a Basquasher, Miyuki is still an irreplaceable part of the squad, as she is constantly fixing and upgrading their robots for them. 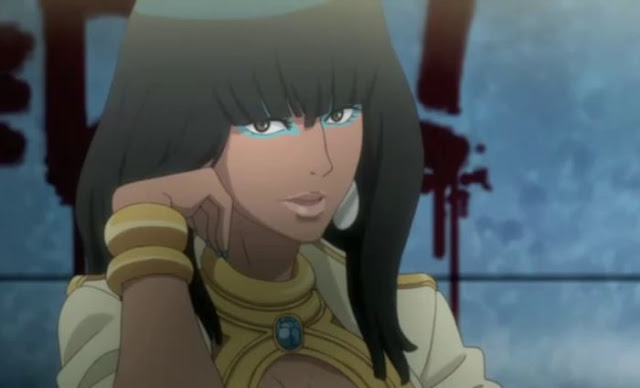 Alice only appears in a short 12 minute anime clip, yet her beauty cannot be ignored.  She is a independent, clever and mysterious woman. At times she can be cold, petty and strict, although she is also experienced, having successfully worked her way to the top of her field as a secret agent.