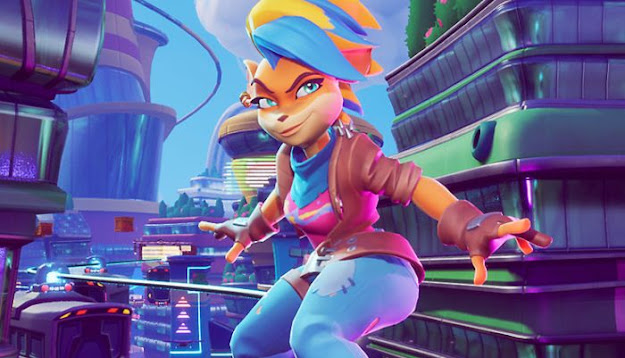 Following the success of Crash Bandicoot N. Sane Trilogy, Activision has given developer Toys For Bob (the team behind Spyro: Reignited Trilogy) a thumbs up to breathe life into the decade-old platformer with a spanking new canonical entry which drops on October 2nd.

A new game from an old yet beloved series sees the return of some familiar faces. Remember Tawna, the sonsy bandicoot who was Crash’s girlfriend and motivation in the first game way back in 1996?

Yes the same character who was considered a bit too inappropriate for a kid friendly game, and subsequently replaced as the female lead in favour of Crash’s little sister Coco from Crash Bandicoot 2: Cortex Strikes Back onwards.

Well she returns in Crash 4: It's About Time, but you'd be forgiven if you mistook her for a new person because Toys for Bob has given the beautiful bandicoot a drastic makeover from dreamy damsel to punk rock chick.
She is Crash's love interest in the first game, and really only serves to fulfil a damsel-in-distress role. She's a tall and busty bandicoot who needs rescuing, that's more or less the extent of her character development.

Though Tawna was given a chance to shine in the 2017 remaster, Crash Bandicoot: N-Sane Trilogy. For example, rather than being instantly captured by the evil scientists in the opening cut scene of Crash 1, she is seen fighting a few of them off before being overwhelmed. 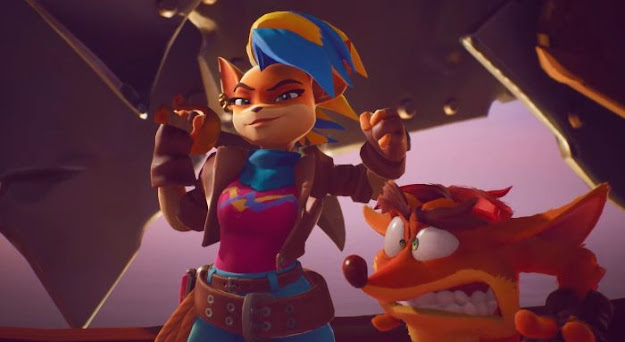 In Crash 4 however, Toys for Bob uses the alternative dimension ploy to completely re-haul Tawna's character. She develops a new level of badassery and gains fat in all the right places. She also has semi realistic proportions compared to Crash and Coco who are cartoony and small in comparison.

Joining the cast as a playable character in Crash 4, Tawna is presented as "an experienced adventurer" and "confident hero." The edgy punk aesthetics reflects this, as the developers go for a fashion statement that expresses her independence and overall toughness.

Tawna has been transformed into a full on action hero, with a spiked leather jacket, a punk hairdo with blue highlights and pink leg warmers, ripped straight out of a 1980s fitness tutorial video.

Her existence prior to Crash 4 is something Toys for Bob clearly weren't satisfied with, because every other character in It's About Time has retained most if not all their design elements from the older games with a few minor tweaks.

On the other hand the new Tawna looks so far removed from her Pamela Anderson inspired incarnation that she may as well be a completely different character altogether. 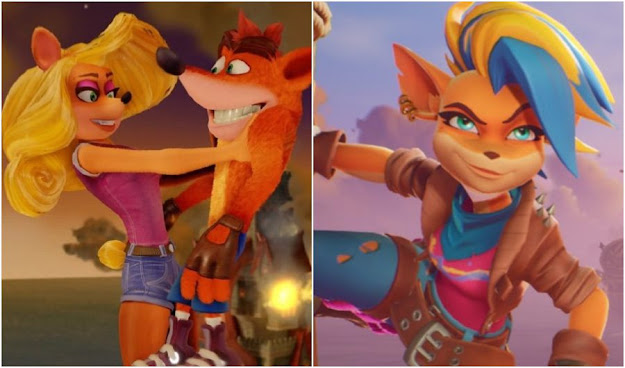 Although in Toys and Bob's defence, she isn't the same Tawna from Crash's universe. This version comes from an alternate timeline, a timeline where she is the daring heroine who saves the day, a timeline where Crash and Coco are supposedly dead. Hence the difference in her appearance and personality.

This is a smart move on Toys for Bob's part because it's a clever way of introducing a new take on an existing character while still leaving the option open to go back if he/she isn’t well received.

It also allows them to have action-hero Tawna with different abilities instead of just making her a taller Coco. Plus it ties into the story of reality falling to pieces.

In the PlayStation Blog’s reveal of Tawna’s gameplay– Toys for Bob art director Josh Nadelberg- Nadelberg stated “ We seek to promote and expand upon the representation of female characters in games, and we think that this new Tawna is a complex and aspirational hero that all players will fall in love with”
He also said “She needed to exude strength and dexterity, so we looked towards powerful athletic bodies as inspiration for her physique.

She is a lone wolf who likes to think that she doesn’t need anyone’s help, and we wanted that to come across in all aspects of her look, from her outfit to her range of expressions.” 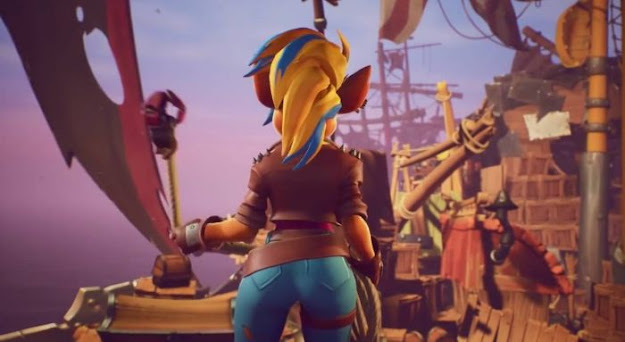 Naturally Tawna's new appearance has received a mixed reaction from fans across the internet, which is fair considering her extreme change, alternate dimension plot or not. Though one thing everyone can agree on is that our bandicoot queen has become thicker than a bowl of oatmeal.

It's interesting to know that Toys for Bob’s early concept designs for Tawna looked similar to her original appearance. One of them sees the blonde bandicoot in a trendy safari/Indiana Jones outfit, while another has her dressed up as a hardy mountain climber. 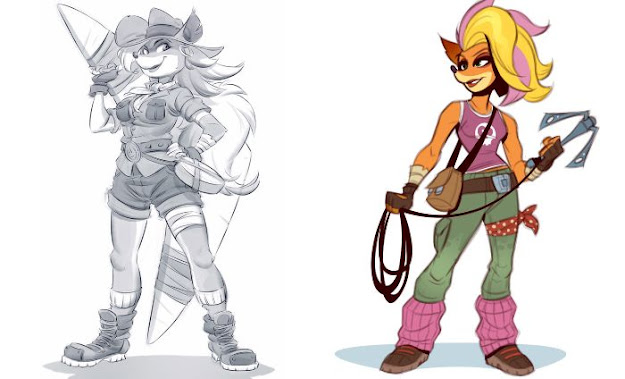 While her current look is indeed gorgeous, there's no denying that Tawna's safari concept art is a solid contender and perfectly invokes what they were going for without making her character unrecognisable.

Many fans have also been praising her Indiana Jones concept art, wishing Toys for Bob went with this look instead of the final design we eventually received. Which is understandable, because she actually looks like the Tawna we all know and love.

Not a brand new character, nor a long lost relative, but thee beloved blonde bombshell in an adventurous yet cute getup, ready to kick tail.

With that said and done. Hopefully she'll have several alternate skins to choose from in similar fashion to Crash and Coco, or the actual in-this-dimension Tawna will also make an appearance. If this happens then it'll surely keep everyone happy.

The change in appearance also comes with new nifty gameplay elements, particularly a handy and sturdy hook-shot. This ability allows her to “quickly travel through levels, attack enemies and break crates from long range.

Tawna also has a devastating yet satisfying ground-pound, a couple spin kicks, and the ability to climb up walls.She joins a small list of other beloved playable characters from Dingodile to Doctor Neo Cortex, and is the most nimble of the bunch.