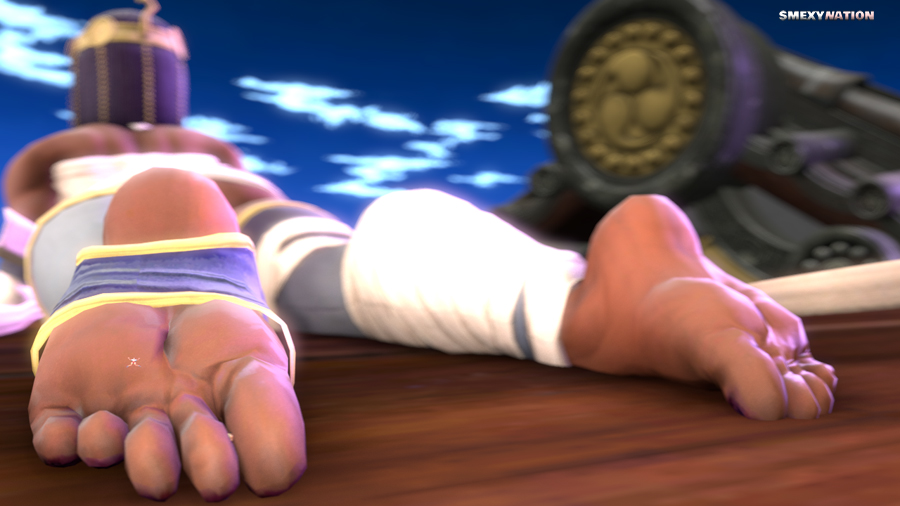 Sfm's smut scene was over saturated and the animators were leagues ahead of me in both experience and followers. Instead I found more pleasure in posing feet and giving female characters dominance over their victims, which made perfect sense since I had developed a foot and crush fetish long before.

My passion for video games and feeble bugs being crush and stepped on barefoot by cruel woman only fuelled my desire to create an plenteous amount of giantess art and the more time I spent on Deviantart is the deeper into the rabbit's hole I found myself.

Source Filmmaker made this all possible in the first place, a movie-making tool built by Valve, a tool I consider easy to learn but difficult to master. With this editing application at my disposal I was able to make my visions come to life through animation and while not the most insufferable software, it always gets the job done.

As a gts artist one of the most important features in SFM is the ability to scale objects, allowing animators the ability to shrink or expand models to immense proportions, along with individual body parts such as the head, arms and importantly for someone like me, legs. 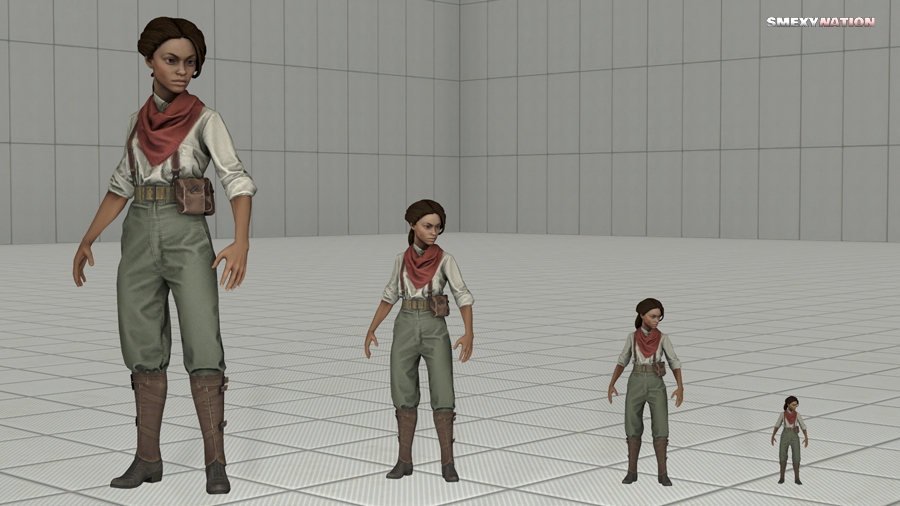 Unfortunately Valve really dropped the ball by not giving animators the option to also scale models from an axis, ultimately allowing objects be stretched, flattened and squished. This feature would've have been extremely useful to myself and other giantess content creators who also use sfm.

Hence why I envy Garry's mod users who have full access to the Ragdoll resizer addon. What's that you ask? It's a quirky gmod tool that allows players to make a ragdoll aka model taller, wider or completely flat.
Had Valve not abandoned Source Filmmaker in 2015 then we may have even seen an variant of this along with other new useful features and fixes.

Sfmlab a resource for lewd models was my source for a majority of the models I used early on, but as time went on I wanted more variety and the models being uploaded just weren't cutting it. On the other hand another 3D community known as Xnalara had models galore from every video game series you could possibly think off.

A big appeal about making gts art is being able to turn an attractive female video game character of my choice into a towering goddess while also revealing their bare feet. It matters not about the character's personality because in the end they all get turned out.

It's at this point I taught myself how to use Blender and port Xnalara models to Source Filmmaker. It wasn't an easy progress and I struggled to work my way around Blender's atrocious UI for some time but eventually much like Source Filmmaker, it clicked.

The whole progress of porting models can be quite tedious and time consuming but in the end it's worthwhile because if I never learnt how to then I'd have to play the waiting game and rely solely on sfm porters. 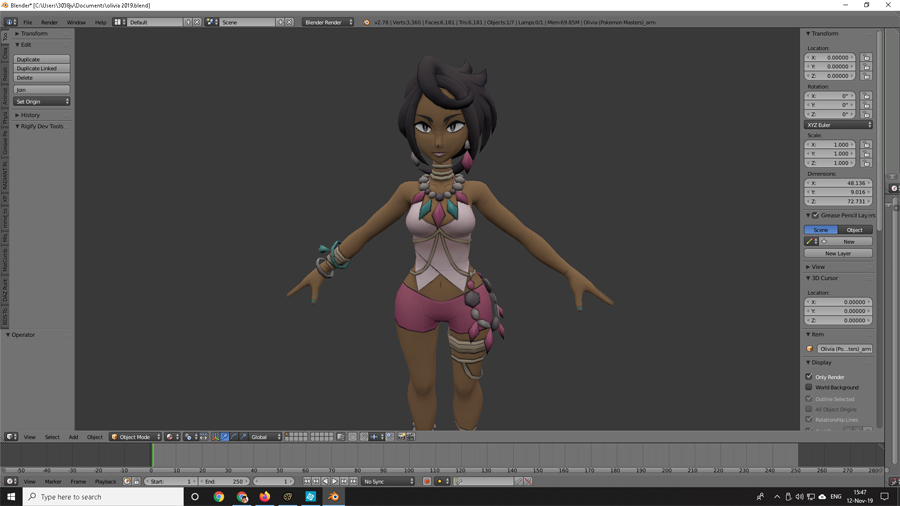 What makes Source Filmmaker so fun is how easily accessible it is and within minutes I can whip up an animation and fine tune it to my liking, unlike say Blender where the difficulty curve is amped up and unnecessary complicated.

One of my earliest giantess renders I made featured Tanya from Mortal Kombat. Her ending in Mortal Kombat 4 already had her pent down as a backstabbing and fallacious woman and I have no shame in admitting that turns me on til this day.

She ticks off all the boxes from a character standpoint and turning her into a giantess made perfect sense. A pov shot of her foot descending on a shrunken Jacqui Briggs was one of the first of many giantess pictures featuring her and I'll admit that women who are canonically cruel in their respective video games always make the best giantesses.


Though not only cruel but also strong and powerful, just one of the reasons why making giantess art with characters such as the gorgeous Nadine Ross and Master Raven hits the sweet spot each and every time.

Majority of characters aren't barefoot by default and the Tanya picture was the first time I had ever experimented with body swapping parts of one model onto another and I have been doing so ever since. It's part of the fun of creating fetish art that allows me to knock two birds out with one stone, i.e my crush and foot fetish.

Feet are extremely sexy to me so making sure a character is bare feet or at least has their toes out in a shot is of the most utter importance to me and I rarely create gts art without a pair of feet in view.


Not to say I don't enjoy creating non-foot focused content once in a while because I do, but not to the extent of bare feet, because it'll always be the main appetiser in my works.

As you may already know I work with predominantly black and dark skinned female characters so the task of finding suitable and realistic ebony feet  was extremely difficult for me and for years I had to settle for vanilla feet, but that all changed recently when I converted a beautiful Daz3D model to Source Filmmaker.

You see while a powerful animation tool in it's own right , SFM just doesn't have enough content to warrant any genuine praise unless you eat, sleep and breathe Team Fortress 2 or any other source game

Which means having to bring in external assets into Source Filmmaker to enhance the overall experience. That's what I did from the beginning, hence why I'm able to do what I love today in creating giantess animations.

I've always done shrunken or tiny woman versus normal sized girl, it's just been my preference, another reason is due to the lack of available scenebuilding city assets.

You'd be hard pressed to find a city model for sfm without haven't to convert it from another program which in itself is normally a long and tedious progress. 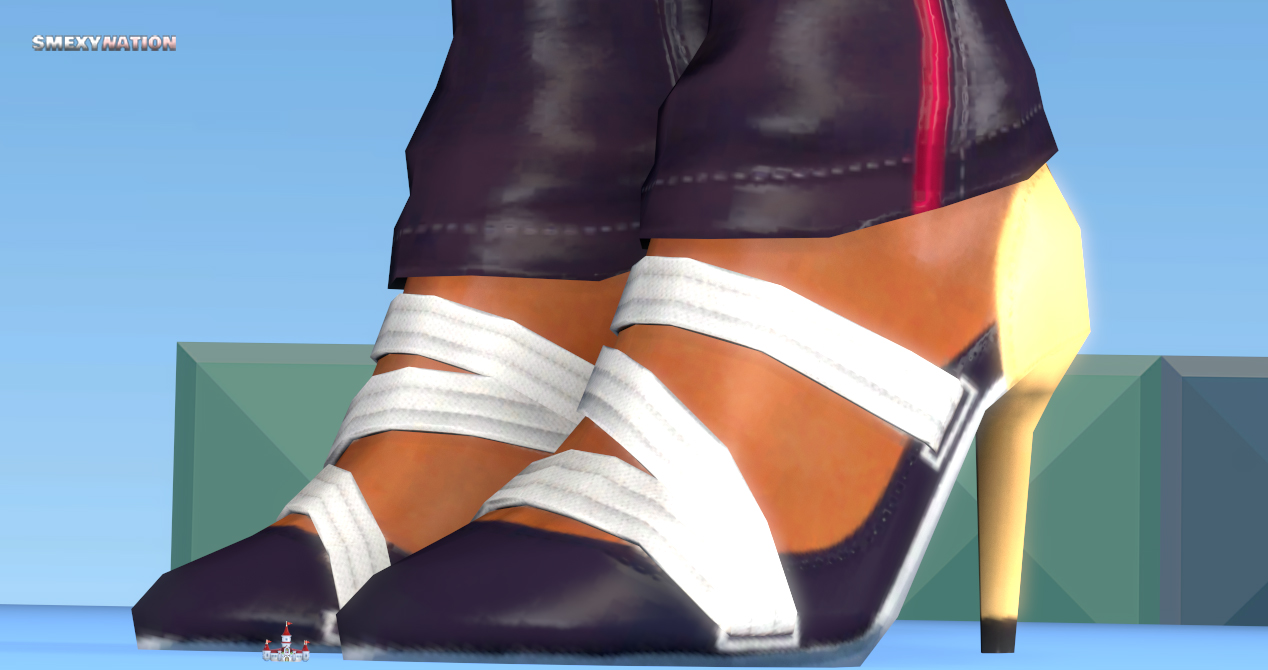 Although this year I briefly found myself growing bored of the same ole shtick and wanted to try something different. I had always wanted to create mega giantesses but due to the lack of resources it prevented me from doing so.

The first mega giantess animation I attempted to make involved Olivia from Pokemon Sun and Moon, I had her relaxing between an implied destroyed village as she spread her toes. The thought of a beautiful gal being so big and dwarfing an entire village excited me and really got my creative juices flowing.

Sitting in the carnage she created without a care in the world, my passion for creating giantess art was once again reignited. More followed but I'd say my favourite mega giantess I made featured the Gerudo queen Urbosa, the best girl in Breath of the Wild.

This was in fact the largest I had ever scaled a giantess to in sfm and she was immensely huge. Scaling down Lon Lon Ranch along with Malon to an almost insignificant size while in the same breath scaling up Urbosa, I had the botw character step on the tiny ranch with her enormous feet.

I had the botw character step on the tiny ranch with her enormous feet.

The size difference was perfect and it showed me that I could at long last create mega giantess scenarios that looked quite decent in sfm. Regardless my one true love will always be shrunken themed but it's nice to switch things up once in while and really challenge myself.

Of late I've returned to shrunken themed works and have been making the victims extremely micro, so to put more focus on the feet rather than the victim, but in the end to still include the shrunken participant. Much like mega giantesses I also enjoy shrinking victims to the tiniest they can be while still appearing visible to the viewer.

At one point I was also creating youtube videos but that quickly came to halt since I prefer animated gifs over creating actual videos. Though at one point I'm gonna return to making animated videos on YouTube or even turning some of my gifs into full blown videos so you can subscribe to my Youtube channel in the meantime.

Despite starting my journey as a gts artist in 2016 I still have a lot to learn and create. And all the beautiful new ebony video game characters coming out this year and beyond only motivates me to make more giantess art.