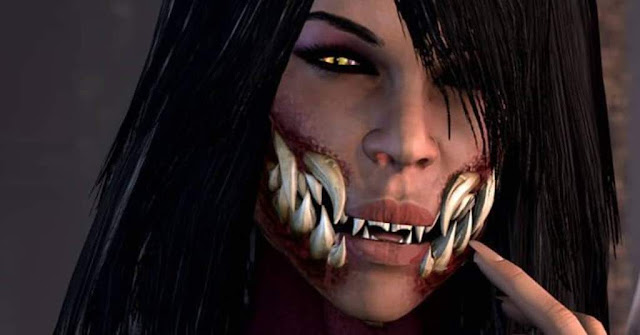 Let's face it, there's isn't much girl vore in mainstream games. Whenever vore occurs it's usually a hideous monster or wild animal who has the pleasure of whetting their appetite. Nevertheless we managed to find the hottest vore characters to devour prey. These woman are cruel, hungry and just plain evil and we wouldn't have it any other way. 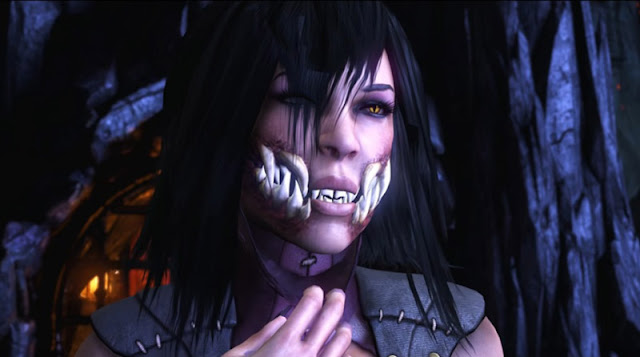 It shouldn't be a surprise that Mileena is the first to be featured on this list especially when you take into account the sharp teeth hidden behind her mask. Mortal Kombat is best known for it's gruesome fatalities and vore isn't off the table. Several characters in the series have utilised vore but none look more appetising doing so than the Edenian predator.

Her well known fatality Man-eater which made it's debut in Mortal Kombat 2 (1993), consists of Mileena pulling down her mask and virtually inhaling dazed opponents, only to spit out their bones or blood chunks onto the floor after entirely digesting them whole. Coupled with the desire to eat her adversaries makes Mileena one of the most savage and hottest women in the entire series. 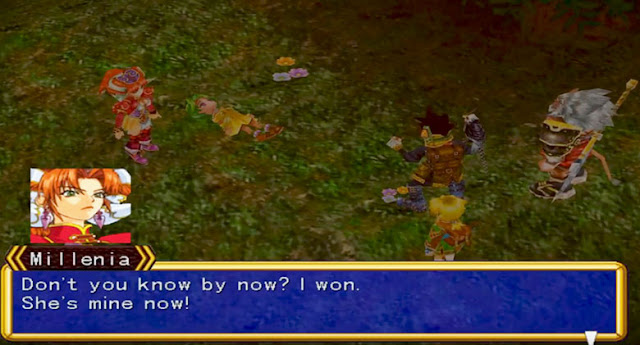 No one greedily slurps up demon souls better than Millenia, a physical manifestation of the devil himself. Introduced in Grandia 2 (2000), many people may be unaware of this feisty demontress outside of avid jrpg fans and old school gamers, but that doesn't change the fact that she has rightfully earned her spot among the chosen few.

To people unaware, soul eating is generally about a character who eat souls. How they choose to consume souls varies, but the outcome is almost always similar: the victim's soul becomes a apart of someone else. In Millenia's case she is determined to absorb all of Valmar's body pieces in Grandia 2. What's extremely hot about Millenia is her determination to absorb souls, showing little emotion as she devours vulnerable victims tainted by Valmor. 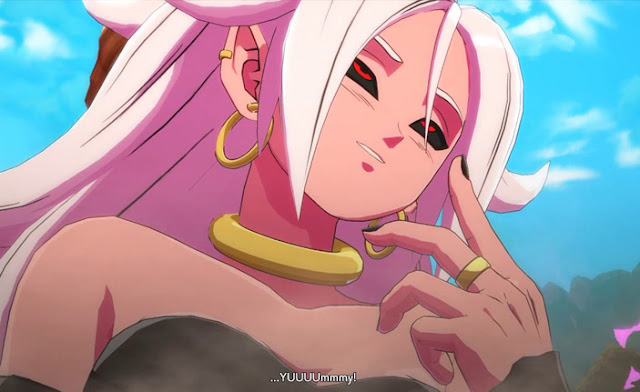 It's been long overdue but at long last there's a new vore queen in gaming. Making her debut in Dragon Ball FighterZ (2018), Android 21 is one of the hottest new editions to the Dragon Ball franchise and the main reason is due to her insatiable urge to turn her victims into candy and eat them without a second thought. No one's safe from her devastating hunger beam, a technique which transforms opponents into sweets for quick consumption.

Watching this sexy monster girl in action as she eats and absorbs her victim's powers to obtain their DNA and increase her own power is extremely satisfying. Never before has there been anything like this showcased in gaming, and witnessing the pink fiend toss a victim into her mouth and consume them in one take while giggling is a stimulating act which displays Android 21's cruel and sadistic nature. 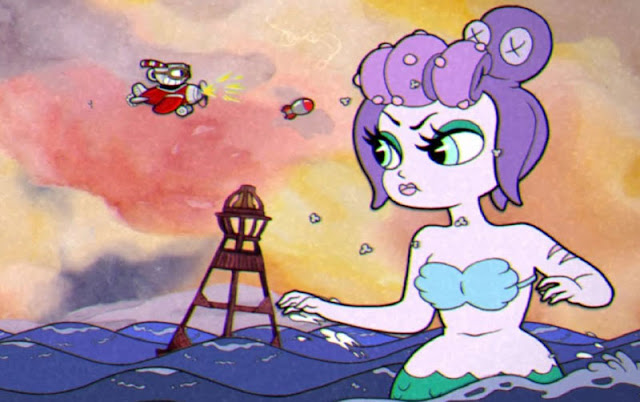 Suggestive vore in Cuphead (2017) comes in the form Cala Maria, a gigantic mermaid who happens to burp out ghost pirates during her boss battle. It's heavily implied that Cala has eaten countless pirates lost at sea and this is evident as she belches up their ghosts in unladylike fashion. It's extremely hot to imagine a cute giantess predator such as Cala Maria devouring dozens of helpless pirates and Cuphead leaves little to imagination. 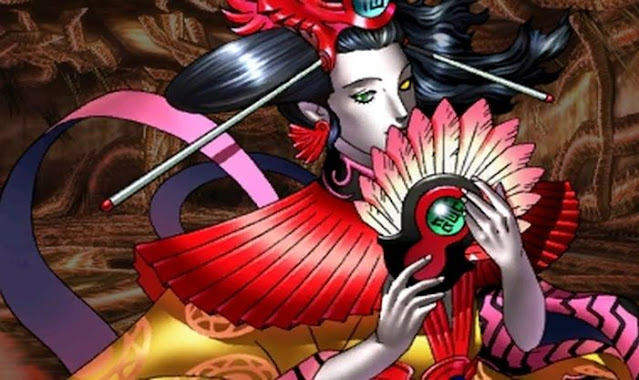 Shin Megami Tensei IV bought players an iconic vore scene where ancient Chinese goddess and demon Xi Wangmu devours a bunch of brave yet foolish soldiers. After devouring each and every last one, she claims to feel their souls fighting and churning in her stomach, much to her sadistic pleasure. 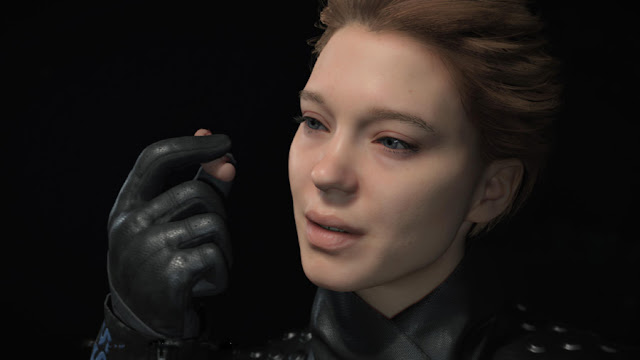 Death Stranding is one of the strangest games of all time, which is why Léa Seydoux's bug eating scene fits right in place and in the same breath it's mildly arousing. The game sees her casually eat and swallow a squirming fetus bug, who obviously doesn't stand the slightest chance. 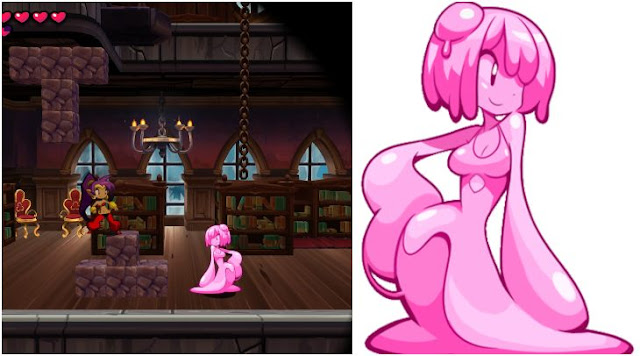 It's no surprise that the cutest ever looking slime monster comes from a Shantae game. Slimegals in Shantae Half-Genie look like pink blobs when travelling, but take the shape of a cute slime girl when they spot Shantae. If she gets too close then they'll eat her, trapping the half genie in their slimy body. 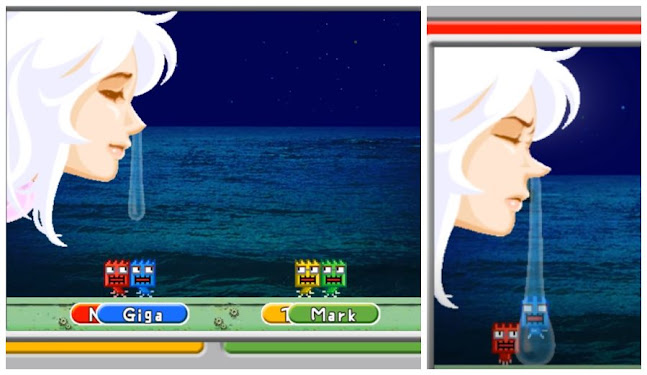 Imagine being sucked up a giant woman's runny nose never to seen be again, well that's exactly what happens in one of the wacky multiplayer games in Warioware inc. You play as colourful bug sized creatures from the opening and must dodge her slimy nose dribble. If you get caught in it she pulls you back up into her nose and the last one standing wins. 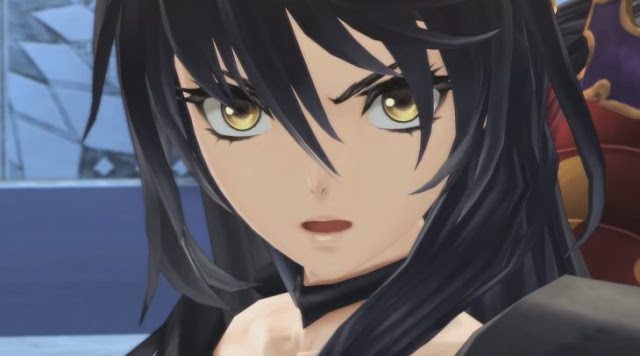 Tales of Berseria revolves around a dark haired heroine called Velvet who absorbs demon, human and malakhim souls with her daemon arm. Throughout the game she claims plenty of victims, though one of the most notable vore cutscenes in the game is during a flashback of how she got her Demon Claw, in this scene she consumes several werewolves ever so savagely. 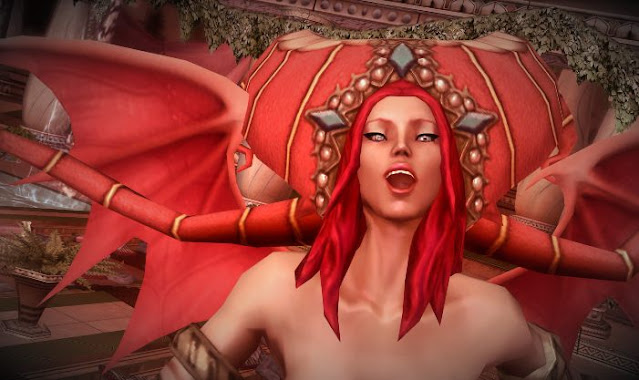 Succubus really lives up to her name and legendary status in Castlevania's Lord of Shadow, a beautiful yet deadly monster girl which Simon encounters in his story path. At some point during their battle to the death, Succubus begins absorbing and inhaling what appears to be either the life force or souls of really hot and pretty chicks that surround her during their fight.

When Succubus performs the kiss of death, she completely inhales the women who then turn into mist  before sucking them up entirely until they disappear. Throughout the boss battle with each girl she consumes, she grows more powerful, ultimately adding more attacks to her arsenal. 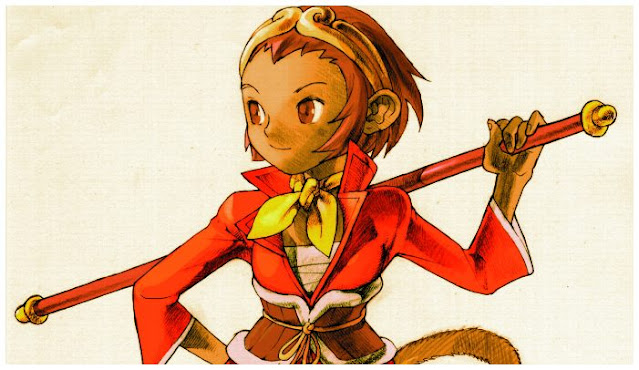 In Marvel vs Capcom 2, one of SonSon's  hyper combo moves involves the cheeky monkey transforming her opponent into a giant fruit, promptly eating them and then spitting out a seed. It's  homage to the POW item featured in the SonSon arcade game, which transforms all enemies on the screen into consumables.

The list is quite thin and since there isn't a lot of female vore in video games, we have to decided to take it one step farther and identity characters who stick out as suspected predators.  What this means is female characters who look like they participate in good ole 'vore'. Monster girls have been a thing in video games for decades and a lot of these chicks probably have questionable diets, let's shed the spotlight on several female characters  who mostly likely swallow and digest vulnerable prey. 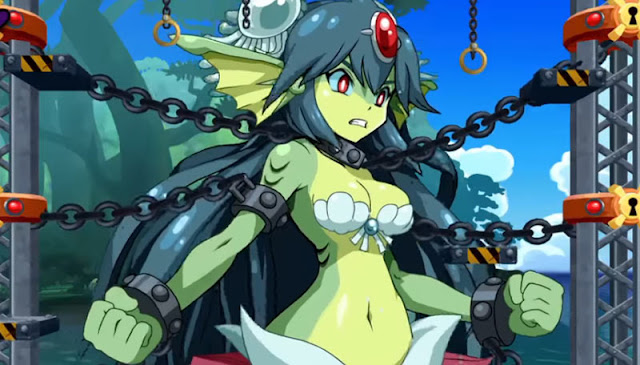 Queen of the mermaids in Shantae Half Genie Hero (2016), a huge mermaid such as Giga Mermaid couldn't possibly survive on a vore free diet, and she certainly looks like the type to consume prey.

It's also possible that the dozen of human sized mermaids who accompany her offer themselves as snacks when their queen is hungry (wish for thinking). Looking back now, it was a missed opportunity on WayFoward's part not to at least include a vore attack or some implied dialogue as fan service. 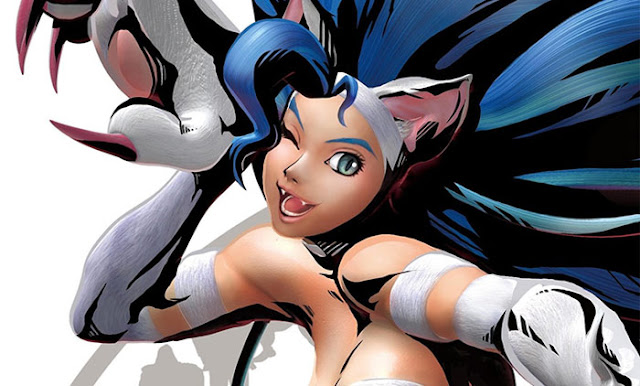 Making her debut appearance in Darkstalkers (1994) as one of the first female characters along Morrigan Aensland, it just wouldn't make sense excluding Felicia considering she is a literal cat woman, and on instinct alone we suspect thousands of mice and other small rodents have succumb to her tiny belly over the years.

Felicia is extremely agile in battle with her abilities, being athletic and gymnastic in nature, meaning she can catch prey with relative ease. 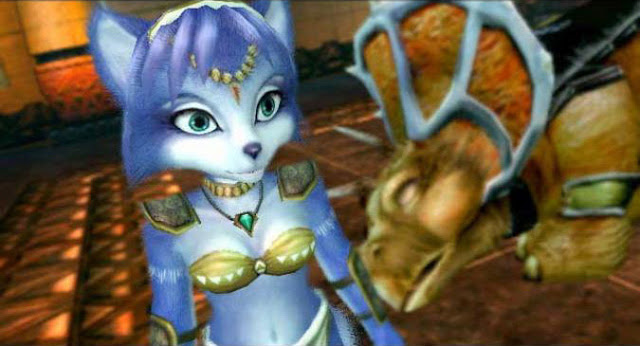 Krystal is one cute character, that's something many can agree on whether you consider yourself a furry or not, and as a vixen we suspect her diet consists of critters and insects, lots of them.

Thought Krystal probably isn't the type to eat her 'snacks' out in the open and rather a guilty pleasure, hidden from plain sight as she noms down a dozen squirming victims to whet her appetite. The dozens of Krystal vore animations on Youtube should give you an good idea of what we're talking about.

The great Fairy (The Legend of Zelda) 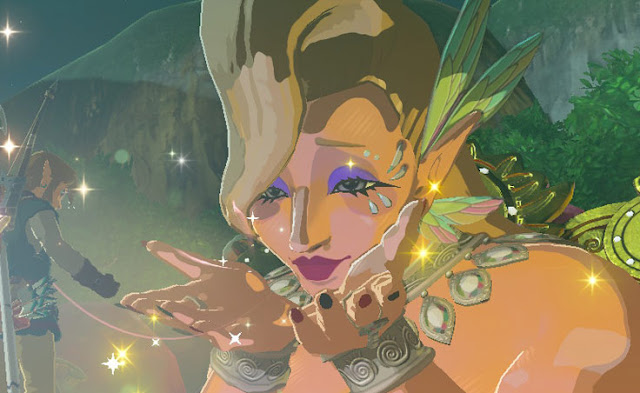 What could a woman as large as the great fairy be living on, tiny fairies is our guess. As you may be aware now, the Hero of Time adsorbs fairies in bottles to refill his health, thought what if The Great Fairy also used fairies, only instead for consumption?

The Great Fairy is extremely big boned in Breath of the Wild and we couldn't possibly imagine her diet consisting of only fruits and vegetables. There's only one explanation, she has possibly been devouring fairies or Hylian souls. 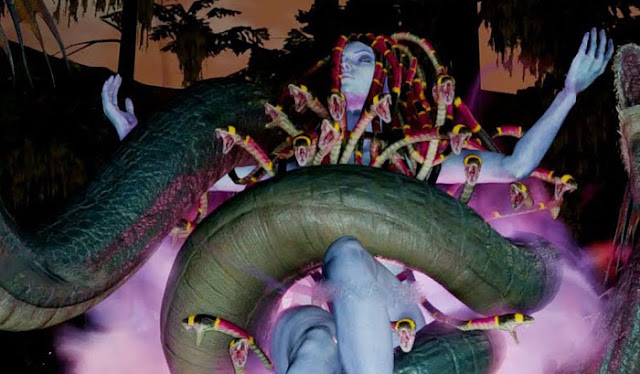