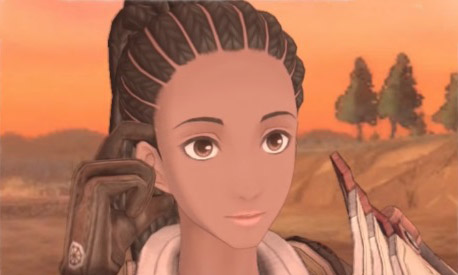 Valkyria Chronicles 4 features their rarest of unicorns, a caramel waifu.

Releasing almost ten years after the first entry, Sega has bought Valkyria Chronicles 4 back while returning to the series turned-based tactical rpg gameplay it originally became renowned for. Once again the game is set in the fictional mainland of Europa with an assortment of anime soldiers to employ onto the battlefield, though none stand out more than Squad E's Jean Matrix, a cute young woman who is unlocked at the very start of the game.

There are a lot of pretty woman in Valkyria Chronicles 4 and there are plenty that are hot as well. However there is only one Jean Matrix, But, why is she so attractive? What is it about her that screams “sexy”? We're willing to reveal all. These are our main reasons why the 29 year old Private is cute and deserves way more attention.

You have to admit a girl with Jean's features isn't common in Japanese games, and her unique design is such a breath of fresh air in contrast. She doesn't have brightly coloured hair, she isn't 'cutesy', nor does she look like your typical anime girl and that's what makes Jean much more exotic than her counterparts. We're one hundred percent positive you won't find another female character like Jean in Valkyria Chronicles 4 or the entire series.

Jean isn't the one to mess with, as a Private and Lancer she's hard as nails and plays her part well. A tough cookie with an extraordinary physique means this warrior-tress can take and dish out a lot of pain. She enlisted herself in the army thinking it'll be perfect strength training and is treated like one of the guys despite her cute appearance. She also doesn't like 'mushy' stuff, so chocolate and roses are definitely not gonna impress this lass.

What's Jean's secret skin remedy? The Private looks extremely ravishing as the game's lighting hits her face and no matter how hard Sega try to masculate Jean, it just won't work because this girl is very easy on the eyes and her gleaming cocoa skin is a testament to that. Which is also one of the reasons why we would've loved to see Jean in a swimsuit, though  unfortunately this DLC is only reserved for the main characters.


She has beautiful hair

Jean rocks thick braids sprouting from her scalp and it is long as it is pretty, reaching down to her her back. One can't ignore that the soldier is giving us 90s fever, joining the ranks with a handful of female characters who have adopted braids into their variable styles. From her braids, to the hairband that holds it in place, this is Jean in her element.

Her juicy lips adds an exuberant charm to her whole appearance that looks really enthralling. Jean's lips are very inviting and like every feature she exhibits, makes the female soldier stand out (in a good way of course.) We have to applaud the character designers at Sega for managing to get her lips right, oh and Jean's husband is indeed a very lucky man.


She has fine eyebrows

Jean's hair, lips and beautiful skin may be her main highlight, but her eyebrows deserve just as much attention. Jean's eyebrow game is on point and her medium shade of brown is a pretty contrast to her dark hair and bold beauty. There is something so flirty and sophisticated about the way this soldier's thin brows come to a sharp point. Her brows also prove you don't need an artificially high arch to look seriously sexy.