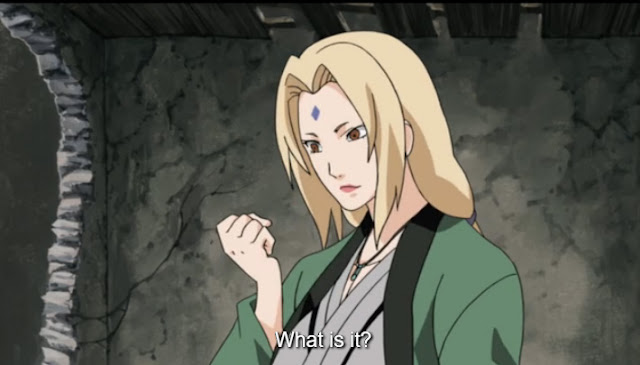 Naruto Shippuden has been a very bleak series for its entirety, with treachery, evil revelations and unexpected deaths at every corner. Unlike Naruto's manga however, the animated series gives it's audience “respite” arcs, best-known  as "filler" by fans.

Naruto's Tsunade is a very hot woman with curvy assets, renowned as the world's strongest kunoichi. Which is why watching her effortlessly capture a bug and crush it in the palm of her hand is a sexy yet underrated moment in the Naruto: Shippūden anime series. Episode 287 "One Worth betting on" to be exact.

Anime is known for it's avid obsession of trampling and stomping bugs. Several Anime films depict cute girls awkwardly trampling helpless insects beneath their feet, either barefoot or in chunky shoes. Short clips which can be found and viewed on the weird part of  Youtube.

Regardless of these other clips, Tsunade's hand crush is very special indeed. She doesn't squish the insect in a traditional fashion and nor is she panicking or inconveniently moving around. Tsunade captures the flying pest with ease and squeezes the bloody life out of it. Telling us this probably isn't the first time Tsunade has caught and squashed a bug. 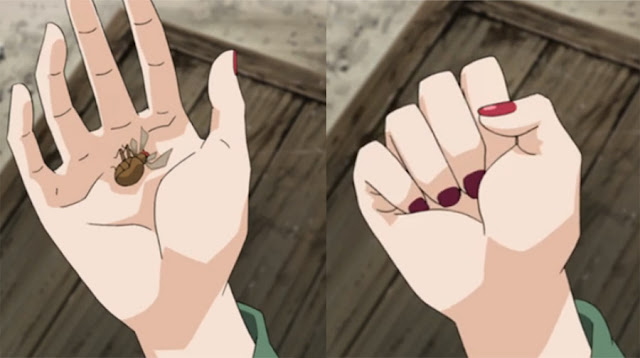 Tsunade takes a quick glimpse at the insect struggling to escape, before squeezing it in the palm of her hand and revealing a cruel, sadistic and twisted nature. Hand crushes in general are rare, specially compared to foot crush media. Which only makes this scene more intense, exciting and nob throbbing.

The female ninja not only displays her speed, agility and female dominance but also a merciless and impatient disposition for small insects. After Tsunade captures the creepy-crawly, Raikage asks "what is it?" totally oblivious to the bug flying over his head, to which Tsunade casually responds "just a bug".

Not only does Tsunade crush the bug in her hand, but she also doesn't have any regard for it's life, seeing it as nothing more then a nuisance. No matter how small and trivial this scene is, witnessing Tsunade cruelly crushing a bug in the palm of her hand along with the lazy "just a bug" line will forever be one of Tsunade's hottest on-screen moments.

The details of Tsunade's palm, her coloured nails and overall milky skin tone highlight what makes this scene so sensual and powerful. As Tsunade closes her fist, you can see the trembling force and impending doom of her tiny victim whose life is taken away for simply being at the wrong place at the wrong time.

September 11, 2018
Let's face it, there's isn't much girl vore in mainstream games. Whenever vore occurs it's usually a hideous monster or wild animal who has the pleasure of whetting their appetite. Nevertheless we managed to find the hottest vore characters to devour prey. These woman are cruel, hungry and just plain evil and we wouldn't have it any other way.
7 comments
Read more

September 15, 2018
Bottoms up! Regardless of what you call it—booty, junk in the trunk, donk, bootius maximus, or apple bottom, there’s no denying butts are a glorious sight in video games when shown in the perfect angle. Subtle sexual innuendos have been running rampant in Nintendo games for decades, despite their family friendly reputation. This article is a celebration of Nintendo's greatest female booties in recent years. It's no a secret that Nintendo have been trying to attract an adult audience for quite some time now, and sexualized female characters have been appearing more frequently in Nintendo games of late. Not to say it wasn't a thing considering characters like The Great Fairy and Kate Alen existed long before, but in the year 2017 we were blessed tenfold. Not many people will admit to admiring and ogling the derrière of a computer generated bombshell, but we couldn't resist the urge to celebrate some of the hottest and most distracting female buns in Nintendo's mult
11 comments
Read more

November 09, 2019
Fortnite is one of the most popular video games in existence, standing on Mount Everest with other prevalent franchises such as Tetris, Minecraft and Grand Theft Auto to name a few, and with every popular game grows a fandom who produces fan art of their favourite characters or in this case skins. It's also a known fact that each fandom has a filthy or shall we say weird side of the spectrum that is often frowned upon by the normies yet ironically in the same breath sought after in high demand depending on where you look.  No not we're not talking about the abundance of rule 34 and futa shenanigans, that's another story for another day, we are in fact talking about the niche community of 3d artists who create feet and giantess fetish art of Fortnite characters in source Filmmaker also known as my world. Beyond the world of sfm artists who make posters and wallpapers on twitter is a less exposed community  of fetish artists who mesh feet onto their favorite s
Post a comment
Read more